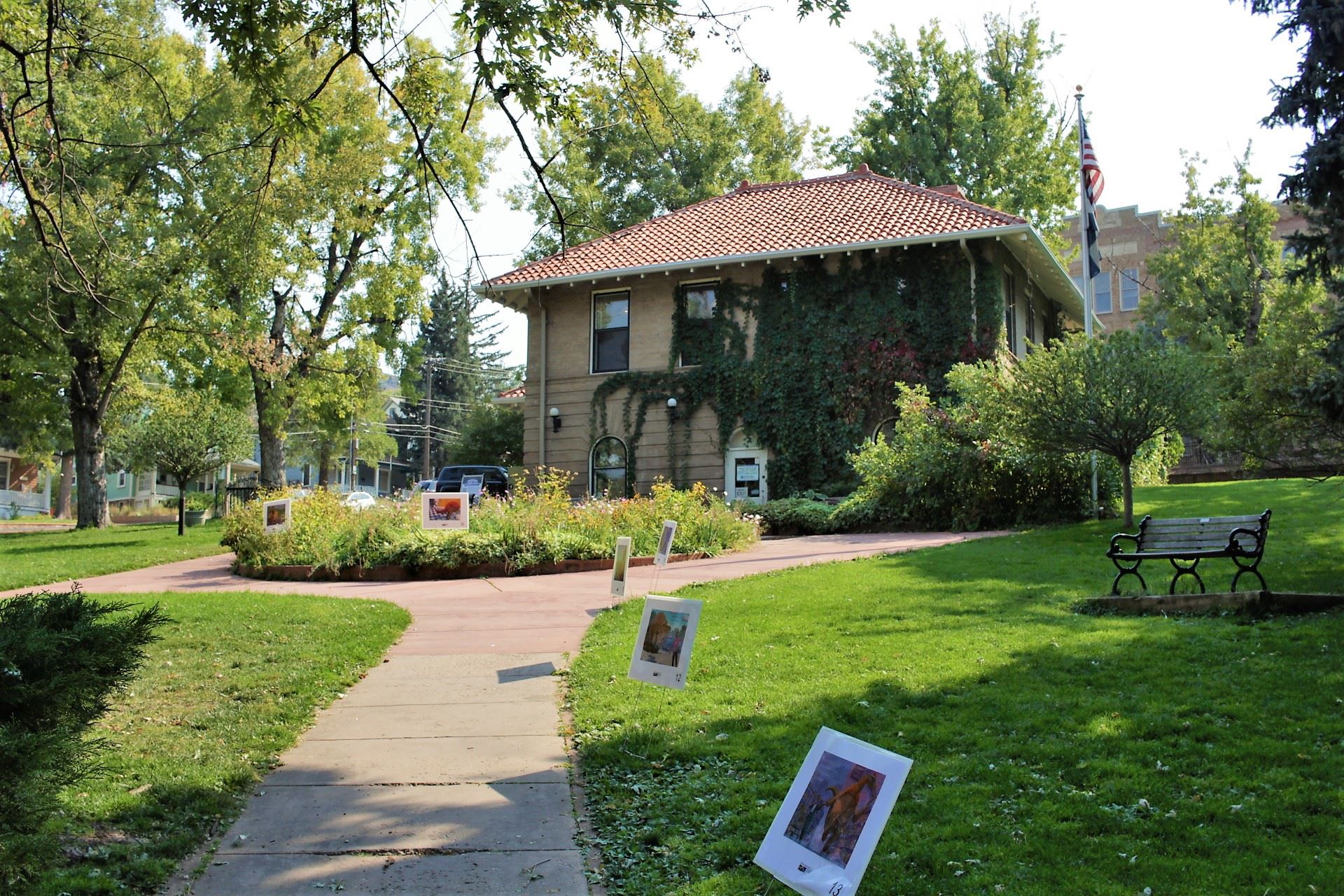 The preliminary design for the Manitou Springs Historic Carnegie Library remodel and expansion was presented to the Historic Preservation Commission in August 2022. The design, described below, was met with overall support. Many members of the Preserve and Renew Our Carnegie Library Task Force were also in attendance to show their support for the design.

The design includes an ADA accessible lift, enclosed by a new building to the south of the main library building. It will be attached to the main building by a foyer which functions as an upper-level entrance and is primarily composed of glass. The glass element, while more modern in appearance, is intentionally designed to connect to the historic structure as minimally as possible. The lift enclosure building also has large picture windows which allows the public to see through it to the historic façade. The lift, accompanied by stairs, lead to the new garden level addition.

The lower-level addition hosts ADA accessible restrooms, library services, study rooms, and provides a lower level, north-facing entrance. The lower-level entrance is also comprised of glass to provide a transition point between the new construction and the historic structure. The addition also provides the opportunity for a rooftop terrace, accessible from the upper-level entrance.

The addition is intentionally designed with materials that complement the historic structure without mimicking the design entirely. The Secretary of the Interior’s Standards for Rehabilitation state, regarding additions and exterior alterations, “The new work shall be differentiated from the old and shall be compatible with the massing, size, scale, and architectural features to protect the historic integrity of the property and its environment”. By using roof materials and brick patterns that differ slightly from the original structure, we can ensure that the original Historic Carnegie Library is preserved and is distinguishable from the new addition.

Next up for the design is to be formally presented to the Historic Preservation Commission for a Material Change of Appearance Certification, as required by the Manitou Springs Municipal Code. Then subsequent approvals by the City Planning Commission and City Council.

Design Presentation to the Community

Link to Resolution 1521 - A resolution to approve the conceptual design for the historical Carnegie Library building expansion.

In 1910, local Manitou Springs physician H.M. Ogilbee convinced the Andrew Carnegie Foundation to donate $6,000 for a library. The City participated by purchasing properties at the current site and removing six previous buildings. Ground was broken in 1910. The classical Italian Renaissance library, designed by architect Thomas McLaren, was opened February 22, 1911. The population of Manitou Springs at the time was less than 1400.

Manitou Springs’ first library was established in 1900, in the Parish House of the St. Andrews Episcopal Church. The Reverend E.C. Bonell, Rector of the church, organized a club of 12 women, including several from each church in the town of Manitou Springs.

This club established the library in the church. Having no money to buy books, they asked for donations of books or money. After they had received three to four hundred books, they opened the library, and the women of the group took turns in keeping it running. The library was aptly named a Reading Room, for many people spent hours there in the little Parish House. 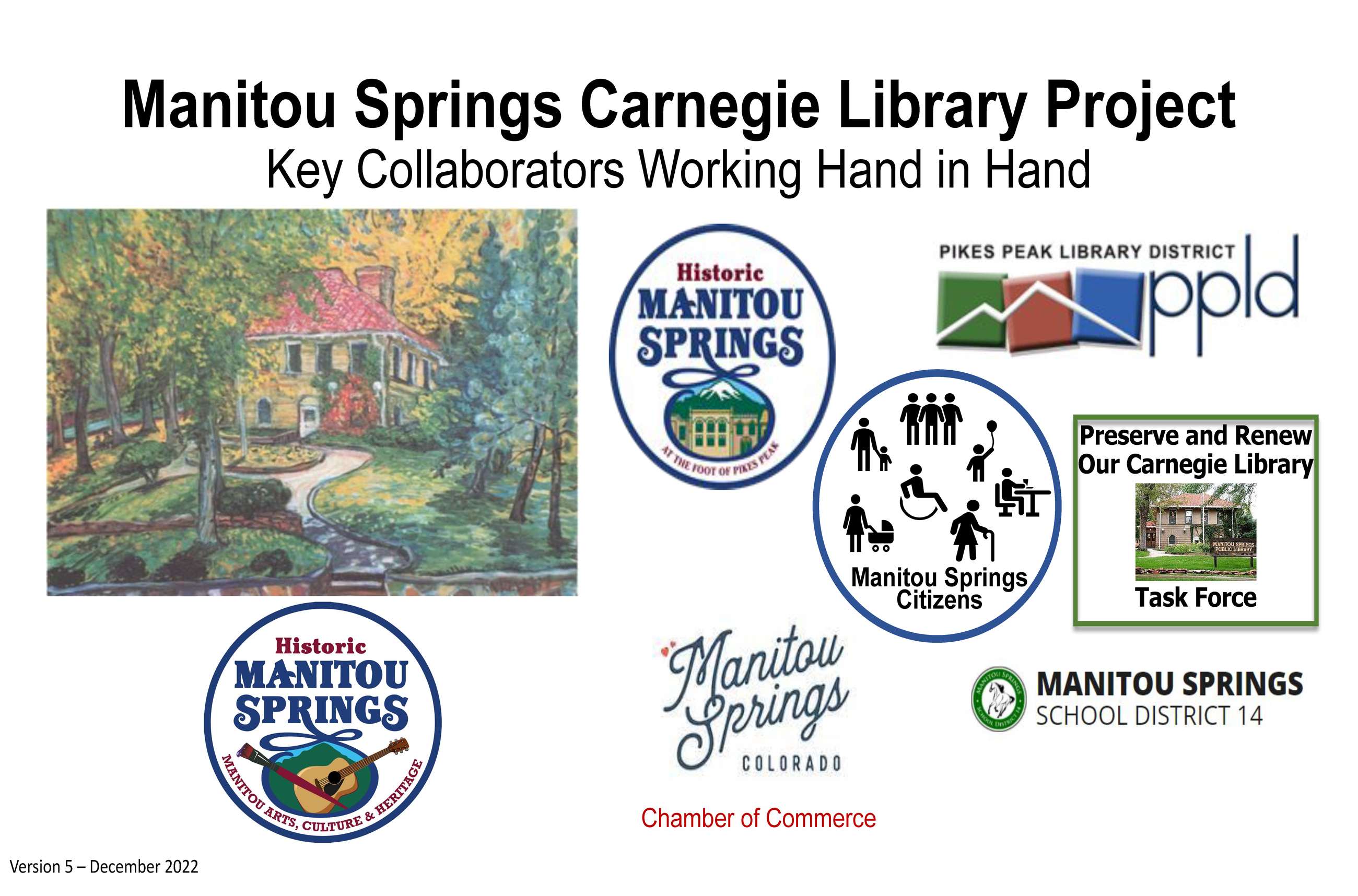 Our mission is to keep the Manitou Springs Carnegie Library a center of knowledge and life-long learning for all, as it has for generations, and serve as a space for community connections for the next 100 years. To realize this mission requires a renovation and expansion of the Library, including complying with the Americans with Disabilities Act (ADA), to meet the expectations of our 21st Century community. We have formed this group to ensure City leaders will take responsibility of and offer support for the physical needs of this building as outlined in the original agreement with Andrew Carnegie.

Our group will take on the responsibility of organizing a capital campaign, supporting the City’s efforts in securing funding through grants and donations, and working with City staff during this renovation and expansion project. We want this relevant symbol of Manitou Springs past, present and future to still be in operation so all individuals have a place to learn and enrich their lives.

Please bookmark this page for updates!