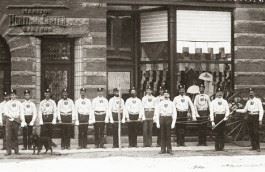 On December 29, 1879 the newspaper reported plans for a ball at The Cliff House to benefit the fire company.

On April 8, 1880 the newspaper reported a contract had been set for installation of five fire hydrants. A contract was also awarded to Dr. Goodrich of Akron, Ohio for all rubber hose at 95 cents per foot with couplings to match those of Colorado Springs. It was also reported that the fire company was taking step to secure a hose cart of the latest pattern without cost to the town. The hose reel was to be paid for by subscriptions from interested citizens and by fines levied against company members for nonattendance at meeting or fires.

Minutes of the company show that on February 14, 1881 the name was changed to WA. Bell Hose and Hook and ladder Company Number 1 because of the large amount of money Dr. Bell had given the company.

The newspaper of March 14, 1882 carried a story that Mr. A.C. Willard reported that his plans had been accepted for an engine house and town hall in Manitou, to be two stories, 22 by 36 feet, with an estimated cost of $1,500.

The Twelfth annual ball of the WA. Bell Hose, Hook and Ladder Company was held at Wheeler Hall on Thursday, May 21, 1891. Tickets were sold for $1 each.

A second fire company was formed on December 31, 1892 "in the west part of the town" and named The Jerome B. Wheeler Hose, Hook and Ladder Company Number 2.

The State Fireman’s Association held its annual tournament in Manitou Springs on July 4, 5 and 6, 1893.

Manitou’s fist motorized apparatus, a 1920 International Model F-31 truck, arrived and hand drawn apparatus will be retired. The truck was to have been delivered several months earlier, but the first one shipped burned in Denver. The truck, costing $3,200, was guaranteed to climb the hills of Manitou.

A fire broke out in the Porter's room of the Cliff House and gained considerable headway before it was discovered. The worst was feared, and furniture and other goods were hastily removed from the building, but a large number of helpers worked furiously and succeeded in extinguishing the fire. Damage was slight.

The DeWitt house, just north of the Cliff House at the mouth of Williams Canon and a small dwelling next to it, burned to the ground. Mr. D.C. White was awakened by the noise of the fire and smoke at 12 midnight. He found the kitchen in flames, gave an alarm and men with buckets of water saved adjoining property. The Dewitt House had 15 rooms, and was a summer boarding house. Loss of $5,000 with insurance of $2,500 was reported.

A fire occurred in Cree's blacksmith shop in Manitou. The fire was promptly discovered and extinguished by the Fire Department, loss was $100.

A fire occurred in the rear of the Iron Springs Hotel when a kerosene lamp exploded. Damage was estimated at $500 to $600. This was evidence of excellent work on the part of the Fire department because that hotel was a rambling frame structure, and built to burn.

Briarhurst, the home of Dr. WA. Bell, was completely destroyed. The fire started in the bedroom of Mrs. Bell. Coals had fallen out of the fireplace. They were removed and the Bells went to bed, only to be awakened by fire under the floor. The fire traveled between the joists, then spread to the attic, suggesting balloon frame construction.

A general alarm was sounded, but the fire company didn't have enough hose to reach the house. The temperature was 15 degrees above zero and Fountain creek was frozen over. Much of the furniture on the first floor was removed, but furniture on the second floor was lost. Soon the roof fell in, leaving only two tottering stone walls. The loss was about $40,000, while insurance was just $18,000.

"One of the most unfortunate and horrible accidents that has happened in this locality for a long time occurred at Manitou yesterday 9 a.m." Engineer Gould, of the Manitou train, sounded a general alarm when smoke was seen. The firemen turned out in force but there was not enough hose to reach the building, but they formed a bucket brigade and succeeded in extinguishing the flames before much damage was sustained. Mrs. Perry Robbins was found lying on the floor with her clothes burned entirely. Mrs. Robbins was from the island of Jamaica and had lived in Manitou for 10 years or more.

The heroic Lizzie Allen loses her life after saving two children. At half past nine o'clock, a horseman dashed wildly down Manitou Avenue shouting that the building of Mr. pollen was in flames. Lizzie Allen, the house servant, knowing the children to be asleep upstairs, pushed through the excited mob of men and ran through the burning building. She passed Jack, the 7 year old boy into the hands of men who followed her, and carried the little on down herself.

That was the last seen of her. It's evident she again went back into the building, but why is unknown. The only theory Mr. Pollen advances, as to the origin of the fire, was that a lamp had exploded.

The Mineral Springs Hotel was completely consumed. It was built 4 or 5 years earlier as a sanitarium by Dr. A.G. Lewis, and later became a hotel. The Fire Department was unable to do much towards saving the building on account of a frozen plug, but directed its efforts to saving the buildings of the Pikes Peak Mineral Water Company. The fire was to have started in the chimney.

The Cliff House had a fire, which broke out about 6 p.m. The fire started under the roof in the main part of the building in a few minutes the flames were leaping 15ft high. Hotel hose was used and fire was soon under control. Loss by fire and water was about $1,000.

A fire was discovered in the small building used as a burro stable between the livery barn of Hutchinson and Sawin and the Barker Hotel. The fire spread to consume the livery barn killing 42 horses, but the barker Hotel was spared. The fire burned out most of the block bounded by Manitou Avenue to the north, Ute Avenue on the south and Otoe Avenue on the west. At 3:15 a.m. help was requested from Colorado Springs, and Chief Baty ordered the outlying hose companies to move to the central station, and dispatched Hose Number 2 and the Hose and ladder truck to Manitou.

The railroad offered to move the apparatus, but the Chief said the Fire department could make the run more quickly by itself. The teams made the run from City Hall at 18 to 20 South Nevada in just 23 minutes. When the fire was under control the City of Manitou invited the members of the Colorado Springs Fire Department to a hearty breakfast at the Norris House.

A fire broke out at the Manitou House which destroyed the building. It started in the north wing of the hotel in the kitchen. Wind fanned the flames and the north end of the structure was involved by the time an alarm could be turned in. Guests escaped but most lost their possessions. Manitou fire department did excellent work, but the hose was too short. Within an hour the hotel was a total loss of $25,000.

The frame rear portion of the Montcalme Sanitarium behind the stone castle was destroyed with a loss of $25,000 to $50,000. The Manitou Fire Department, led by Frank McArthur, did valiant service. After rescue work was complete they fought the fire and had it controlled in about two hours.

A fire started about 1:15 a.m. at the Norris Hotel and was declared under control at 2:15 a.m. Also destroyed in the blaze were the big livery barn of the Manitou Transfer Company and the G.S. Sheerwood Art store.

The Mansions Hotel, built in 1878 was a big wooden building that burned fiercely. There were 104 guests rooms in the building. The fire started from defective wiring with a loss of $70,000. The Fire department responded but flames spread so rapidly that in a few minutes the entire building was in flames.

After the 1915 fire the Mansions Hotel was rebuilt only to burn again. Manitou Springs put three lines of hose on the fire and called for help. Colorado Springs sent two rigs Number 5 and Number 4 to help. Chief McCartin believed the fire to be incendiary in origin which caused $25,000 damage. The fire started in the rear basement and the whole interior of the building and the roof were destroyed.

Exploding gasoline range set fire to Moonlight Gardens dance hall. The building was almost completely destroyed. Manitou VFD and CSFD Number 5 were unable to save the building. The building was the meeting place of the Ku Klux Klan, but they later moved their headquarters to 25th and Colorado Avenue.

The Ute Chief Mineral Water Plant at the entrance of Ute Pass burned to the ground. Manitou laid out three hose lines and fought the fire from inside the building, but soon were forced outside with explosions of bottled water.